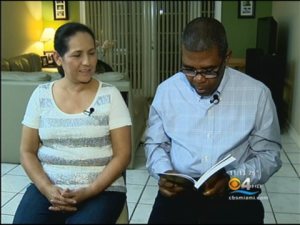 Jorge and Maria Gough penned a book about their son Jaime, who was killed in the bathroom of Southwood Middle School by a classmate in 2004. (CBS4)

PALMETTO BAY (CBS4) – The family of a boy brutally murdered at his middle school 9 years ago has released a book recounting the tragedy, the years that led up to it, and the heartache that followed.

Jorge and Maria Gough told their story to Jason Wood, the author of the book “From Fighting to Forgiving: Learning to Let Go”.

The Goughs’ son Jaime was stabbed to death at Southwood Middle School in February 2004.

“I realized that by holding onto my anger, hate and pain, I was losing myself,” Jorge Gough said in the book. “I came to the point where life started to exist for the sole purpose of hating another person. A change had to take place.”

For the Goughs, finding forgiveness was the catalyst for that change.

“It’s difficult to forget that day,” Maria Gough told CBS 4′s Lauren Pastrana. “That call that we received that day was awful.”

The mother admitted there were days following her son’s murder when she wanted to die.

In the immediate days, weeks and months following Jaime’s death, the Goughs struggled.

For Jorge, it was rage that threatened to consume him.

For Maria, it was her faith in God that wavered.

“I felt that I blamed him,” Maria Gough said. “I fight a lot with him.”

Eventually, she said, she surrendered to God and decided she wanted to share her family’s story.

Over three months of interviews, the Goughs bared their souls to friend and independent author, Jason Wood.

He wrote the memoir through the eyes of this grief-stricken family.

In the book, Wood chronicles the love story of the Goughs. Neither Maria nor Jorge were from the United States.

When they moved here, they met in an english class. They’ve been married for more than 20 years, and have now lived almost a decade without their firstborn, Jaime.

Their son’s killer, Michael Hernandez, was convicted of first degree murder and sentenced to life in prison without the possibility of parole.

Because he was a minor at the time, a recent Supreme Court ruling may mean a judge could overturn that “automatic” sentence.

The Goughs say they’re prepared for that possibility.

They found peace through their pain, and hope the book will help spread their philosophy of forgiveness.

“The fruit of forgiveness is great. It frees me from a lot of pain and suffering and anger,” Jorge Gough said. “That’s one of the reasons why this book is so important.”

The Goughs created a support group, The Oasis Group, to counsel others living through similar tragedies.

The hope is to get the book in as many hands as possible, starting with churches, community centers, correctional facilities, and of course, schools.